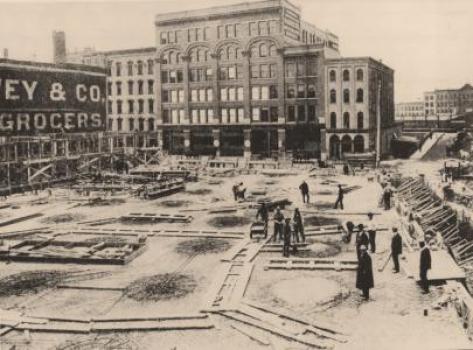 Built in 1906-07 by architects George Ferry and Alfred Clas, the Marshall Building was originally named John Hoffman & Sons Grocery Building after the owners and primary tenant. The building was originally built as a five story building, however, in 1911 the building completed a second topping-off ceremony with the addition of a sixth floor in order to accommodate the growing retail operations of John Hoffmann & Sons wholesale grocery firm. Hoffman’s coffee roasters were located on the sixth floor and a sugar pulverizer was on the fourth floor.

Beginning in the late 1920s, Hoffman & Sons shared space with various manufacturers. The box-like shape and arched pavilions were common features of the many warehouses at that time, yet the way it was constructed was groundbreaking with the assistance of prized structural engineer Claude A.P. Turner. Turner, a pioneer of reinforced concrete construction, made the building a test project for his pioneering construction method known as the Turner System or the Spiral Mushroom System. Most buildings around this time used wood-and-steel-framed floors, which made construction more expensive and tedious, but Turner’s system used flat-slab concrete floors that were supported by mushroom-headed columns and reinforced with steel rebar. The cost-effective technology resulted in a sturdy, built-to-last building. The Marshall Building’s structure is the oldest extant example of the “mushroom” flat-slab system developed by reinforced concrete. The technique transformed the design and construction of reinforced concrete floors worldwide.

Building changes hands in the 1940’s 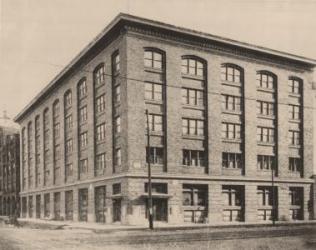 In 1942, Roundy’s purchased John Hoffmann & Sons and the building, which was then used for coffee roasting and sugar pulverizing. In 1947, residential real estate broker George Bockl purchased the building and in 1948 renamed it the Marshall Building after his son, Robert Marshall. The building became occupied by such groups as the Army, Jewish Vocational Services and the American Civil Liberties Union. Bockl would later sell the building in 1966, but his legacy would continue.

In 1974, Bockl reacquired the Marshall Building with the notion of turning it into an incubator for small businesses, artists and craftsmen. He made sure to keep the rents affordable for the tenants offering them the ability to grow their businesses and sell their works and services. The move reactivated the neighborhood and paved the way for the building's next generation of tenants. 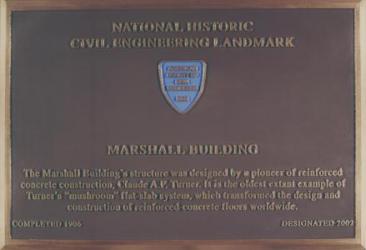 The building remains a creative hub today. It is home to a dynamic mix of art studios, galleries, craftspeople, creative startups, offices & retail users. The prime location offers both tenants and their guests endless conveniences such as easy access to bus stops, ample street and structure parking, an effortless proximity to cafes, restaurants, retail shopping, and just one block from the Public Market and Milwaukee’s three mile riverwalk.